Sweet and sour reflections on the fruit of Corfu gardens 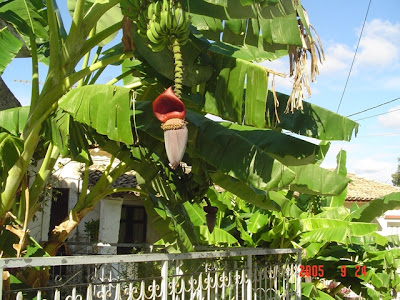 Fruit doesn’t often come any stranger than this (above) but it is merely the fruit and flower of the banana plant, here seen growing in a small Corfiot village garden.
If, as so many of us think, Corfu is one big garden, then a walk through the verdant landscapes of the north-west will appeal to you.
Last Sunday. 9th June. the Arillas Trail re-opened in Corfu. Eight and a half kms of serene Corfiot scenery, through olive groves and across flower-filled hillsides, with sublime views. Signed, mapped, and with its own Facebook page and website, the fact that it ends at a microbrewery with a free sample of beer just shows how well-planned it is. 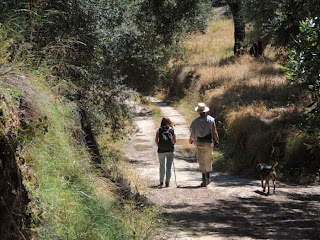 I used to be quite a walker and even led walking holidays in Corfu. These days wobbly legs have turned me into a different kind of rambler – one who wanders the cyberhighways and takes special pleasure in the cyberbyways.
I don’t need boots or Langdale socks for this form of exercise, just a computer and an enquiring mind.
My latest jaunt began with wondering what the island of Corfu might have looked like when Odysseus (Ulysses) was washed up on its shores of what was then  called Scheria, and taken home to meet her father  by the Princess Nausicaa. 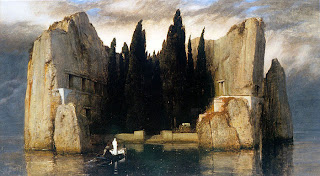 Judging by this painting, Odysseus was swept by the tempest on to a part of the island with soaring white cliffs and spear-like cypress trees. Wagnerian in its stark beauty, this spot has the look of north-western Corfu. But claims have been made for Paleocastritsa and  Ermones to be the legendary landfall, not to mention the eastern shores, where the Halikiopoulos Lagoon was said to be the site of the ancient city of Scheria itself.
Does it matter? Of course it does, if you are curious about such things, and my search for information on the primeval vegetation of Corfu led me into some fascinating places.
More of that in another blog, and more about the gardens of Corfu – Nausicaa’s father was said to have created some fabulous gardens – as well. 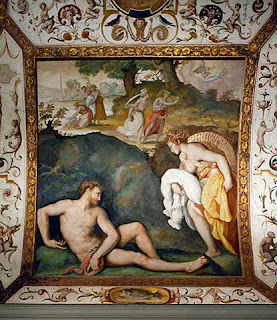 The orange groves of the island are not as extensive as they once were. When I first visited the island I used to ride a rented bike along the quiet road that led from Corfu Town to Dassia. (Yes – a quiet, narrow road with many bends!) 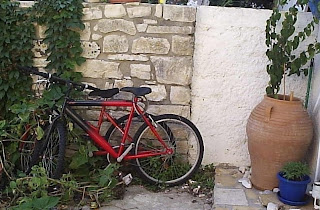 The artist Sophie Atkinson wrote in her charming account of a stay in Corfu in 1911 that the best way to explore the island was by bicycle, In those days of long skirts, before the advent of the mountain bike, that was no mean feat, but she explained jauntily that there was no shortage of young boys willing to push the machine up the hills for a small fee.

Dassia was full of orange groves and the air in April and May was drowsy with the scent of orange blossom. Above Kontokali, where I now live, there are acres of lemon groves, seemingly unharvested. Dassia, of course, was and is home to the great Merlin Estate, where the unique Merlin oranges were ‘born’.
Every old Corfiot garden has its fair share of orange, lemon and mandarin orange trees. And the famous ‘trademark’ citrus fruit, the koum kwat is grown both commercially and for private consumption. 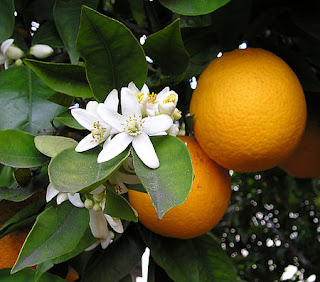 But the gardens of King Alkinoos, and certainly the gardens of today, are host to so many other lesser-known fruits.
No wonder Odysseus was reluctant to leave!

Let’s forget for now, the figs, mulberries, loquats, tzitzifies trees, the prickly pears, the strawberry trees,  the banana trees, the lotos tree, the cherry, pear, apple and quince trees, wild and cultivated. Ignore the carob tree, the pomegranate tree, the almond and chestnut trees.
Many, if not all, of these fruit trees would have been growing both wild and cultivated in the equable climate and fertile soil of Kerkyra (Corfu) in ancient times, and still do. 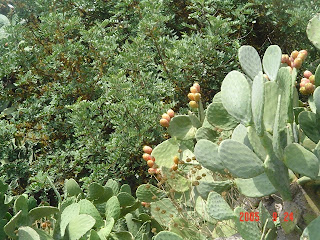 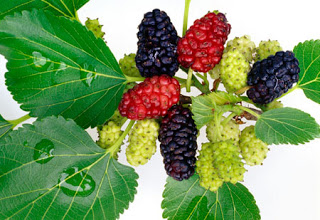 I want to consider the citrus fruits for now though.
What a variety we have here!
Few gardens do not boast at least one orange and lemon tree, and perhaps a ‘mandarini’ tree. Some have grapefruit trees, occasionally an old orange tree has had a grapefruit grafted on to it and the tree bears both kinds of fruit, as I have seen in an old and sadly neglected garden in Kanoni. (not the one shown here !) 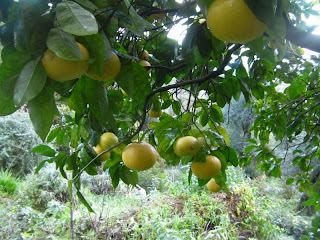 I have mentioned the koum kwat but Corfu gardens bear other fruits too – most of which find their way, or did when Greek housewives spent more time in their kitchens, into the famous ‘spoon sweets’. Allow me to digress here. As a raw recruit to the ranks of  foreign wives in Greece, I was persuaded to have a go at making a spoon sweet myself. Our very old garden, hidden behind high walls in the Old Town, was full of trees bearing small oranges that were otherwise inedible, called nerantzi. (These were the same orange trees that grow throughout Greece in public places, amazing the tourists who cannot understand why no-one picks – or scrumps as we would say – the fruit. You try one straight off the tree and you will know why they remain inviolate).
Anyway, with my sister-in-law’s instructions ringing down the phone line from Athens, I picked the fruit, washed it, peeled it and threaded the peel onto cotton  strings and left them to soak overnight in large bowls of water. Thirty-six hours later, after a great deal of rinsing, squeezing, simmering, adding copious amounts of sugar, allowing the syrup to thicken, applying Windex – no, I mean Germolene – to the burns on my hands, and bottling, I was the proud owner of several jars of incredibly sweet and sticky orange preserve. Was it worth it? Yes, if only to help me understand the psyche of the Greek housewife a little better. Will I ever do it again? Doubtful. 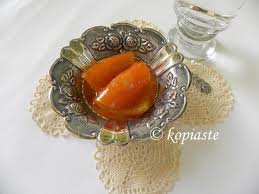 Older Corfiot gardens may still have a bergamot tree. 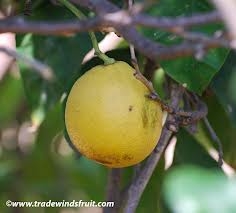 Bergamot also makes an incredibly fragrant spoon sweet, and its oil of course is widely used in aromatherapy and the blending of perfumes. The peel is used to make candied peel and is the source of the unique flavour of Earl Grey Tea. In my case, it was an added reason to visit the dear old yiayia who once lived upstairs from me and used to make the beautiful bergamot glyko just for the xeni on the first floor.

Blood oranges have always been popular in Corfu, perhaps because of the island’s connections with Italy where the dark red flesh of this type of orange features in many recipes for salads and desserts. They are called ‘sanguinia’ in Greek – not hard to see linguistic connection there. 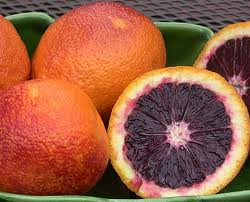 There used to be another kind of orange that was much-loved by Corfiots, called Dolce. Due to its very low acid levels, the fruit has  a bland and extremely sweet flavour. I haven’t come across it for many years – not a good keeper or traveller, it has perhaps lost its popularity in favour of more modern fruit. The Dolce oranges were another favourite with Italians and perhaps came to Corfu with the Venetians or even the Sicilians.

I see no reason why limes should not grow in Corfu and I am sure they do, but while so many Corfu fruits find their way into heady liqueurs and other potent potions, I am certain there is no local equivalent to Robinson’s Lime Cordial! . Pity, for where would the British ex-pats be  without their gin and lime?
The health value of the fruit is huge and varied, and oriental cuisine would be lost without it. Strange to think we have always paid highly here in Greece for imported limes when they are probably hiding in your neighbour’s garden, overlooked and unnoticed. 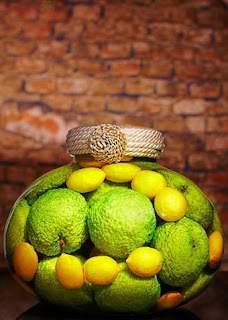 Writing about the citrus fruits of Corfu has made me incredibly thirsty! (Remember the old game of sucking a lemon in front of a bandsman? Maybe those days of seaside band concerts, piers and bandstands, are not part of your childhood memories…)
I’ve got a bottle of homemade Limoncello here – see what I mean? –it may be wickedly delicious but it is hardly refreshing. Van Gogh had the right idea…orange presse 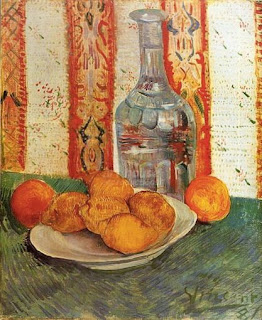 Before I sign off with my ‘discovery’ of something I never knew about Corfu, let me mention an ’orange’ that can be seen in Corfu’s gardens, public and private, but cannot be eaten.
It is the ‘Osage Orange’ 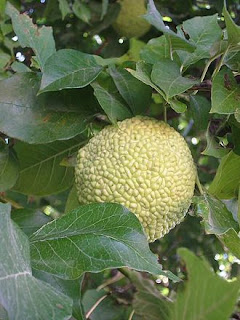 The fruit of this tree is inedible for humans but squirrels seem to like it. In America, where the tree is grown for use in hedging, the fruit was, and still is, used as an insect repellent. One fruit placed under beds or in cupboards has been proved to have natural repellent qualities  as efficient as DEET,
The wood is tough and dense and makes good tool handles, while the straighter varieties have been used for centuries for making bows.
Not an orange then, only in name. In fact it belongs to the mulberry family.
How did the tree find its way to Corfu? Perhaps one of those ardent British gardeners of the time of the British Protectorate brought one to adorn his villa garden? Or maybe the Kaiser had them imported for his Achilleion garden project?

Now we come to my ‘discovery’.
For several centuries, Corfu was one of the chief suppliers of etrog (esrogim) to Jews all over the world.
Let me explain: 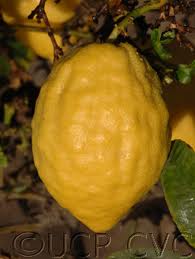 Etrog is a type of citron, now grown primarily in Israel, that has a special role in Jewish ritual during the week-long holiday of Sukkot.
"And you shall take on the 1-st day the fruit of beautiful trees, branches of palm trees and boughs of leafy trees and willows of the brook, and you shall rejoice before the Lord your God 7 days!" Leviticus 23:40.


The etrog is one of the Four Species used in the ritual, the others being the date palm frond, the myrtle bough and the willow branch. 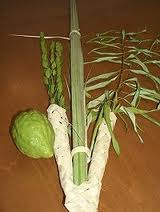 The Corfu esrogim were indeed very beautiful and therefore very popular in Jewish communities. Rich Jews in Corfu spent considerable amounts of money on the smooth and flawless fruit, which was picked and packed into small boxes made for this purpose, and sent to friends abroad. (Antique etrog boxes of silver or wood are highly valued and sell for several thousand dollars). 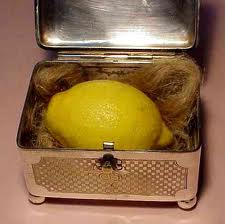 Ironically, the very beauty of Corfu esrogim caused Eastern European rabbis to doubt their kashrus (that they were kosher) early in the nineteenth century. They suspected that the growers in Corfu were grafting the esrogim with other citrus fruits to enhance their appearance, thus rendering them unfit for use in the Sukkot rituals.
True or not – and probably not – the importance of Corfu’s crop of etrog declined for many reasons, including the depredations of World War II and the resulting decimation of Corfu’s ancient Jewish community.
The citron still grows in quiet Corfu gardens. It is called kitro  and the tree is  a kitria.
Corfu, home to some strange fruit indeed, and some beautiful fruit too. 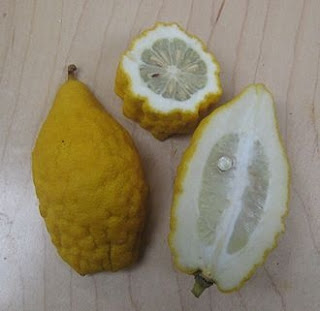 Now I really am thirsty. My saunterings along cybertrails ought to end at a microbrewery too, but an ouzo and lemon would be nice!

Thanks to Kate,Frosso, Corfucius, the Arillas Trail and others for use of photos. Some of them are even my own.

Plugged or unplugged, there are others too!